November 12 & 17
Love Actually(2003)
Much-loved romantic comedy that has become a modern holiday classic. London during the Christmas season is the setting for varied plotlines, all of them with love as their theme. First-rate ensemble cast includes Hugh Grant, Emma Thompson, Liam Neeson, Keira Knightley, Colin Firth and Bill Nighy as a jaded rock star with a mischievous wit. (“Despite all my complaining, we have had a wonderful life!”) Rated R
Rated R 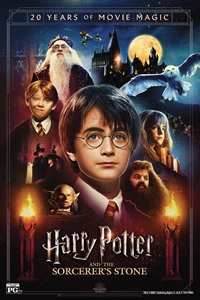 November 21 & 24
Harry Potter and the Sorcerer's Stone 20th Anniver(2021)
On his 11th birthday, Harry learns that he is the orphaned son of two powerful wizards. At Hogwarts, he finds the home and family he has never had.
Rated

November 28 & December 1
The Polar Express(2004)
“All aboard!” On Christmas Eve a boy takes a mysterious train bound for the North Pole, in this adaptation of the heartwarming children’s book by Chris Van Allsburg. The performance capture animation used by director Robert Zemeckis made it possible for Tom Hanks to play six roles, including the conductor (“Tickets, please!”) and Santa Claus. ("The true spirit of Christmas lies in your heart.”) Rated G
Rated G

December 12 & 15
The Matrix(1999)
Before you see The Matrix Resurrections, see the ORIGINAL futuristic action thriller that started it all, on the BIG SCREEN. Keanu Reeves is Neo, a hacker who discovers reality is not what it appears to be (“Have you ever had a dream that you were so sure was real?”) With mind-blowing stunts and visual effects that bend the laws of physics. (“No one can be told what the matrix is. You have to see it for yourself.”) Rated R
Rated R

December 19 & 22 & 24
It's a Wonderful Life (1946)(2018)
Frank Capra’s classic is a cherished Christmas tradition for countless families. Building & Loan owner George Bailey (James Stewart) is all that stands between the good people of Bedford Falls and the wicked miser Mr. Potter (Lionel Barrymore). When misfortune strikes on Christmas Eve, George realizes, with the help of an angel, that he truly has a “wonderful life.” ("No man is a failure who has friends.”) Rated PG
Rated PG